Rebecca, my friend and confidant

Depression afflicts millions directly, and millions more who are relatives or friends of victims. It has been estimated that as many as one in ten Americans will suffer from the illness…which, in its graver, clinical manifestation takes upward of twenty percent of its victims by way of suicide.

R was one of the wittiest, most intelligent, caring, and beautiful people I have had the privilege of knowing. She was my friend for almost three decades. She was my confidant and sometimes my therapist. She was an incredibly thoughtful card sender. She loved searching for and sending the perfect card in which she’d write, or quote, the perfect words. And her timing was perfect. If I mentioned to her that I had finished a writing piece and felt good about it, lo and behold, a one-of-a-kind congratulatory card would show up in my mailbox 48 hours later.

Rebecca wanted what was important in life—friendship, love, family, and not the chaos that darkened her mind, that caused her pain and thwarted her efforts at happiness, and peace. She was the “Sherwood Forest” text tone on my iPhone, the sound of a distant horn through the trees each morning, a text. And I miss her.

R:  “Omg i took the word and excel tests this morning. yikes!”

R:  “At unity by myself getting my dose of gods love. At least trying to.” 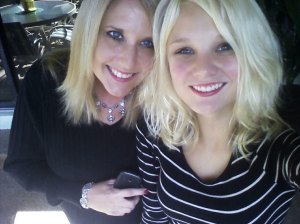 D:  “Hey. At a b ball game. Freezing wrapped in blanket”

R:  “Sounds spleniferous. Im cleaning! Did u like the pic of me & jilli?”

D:  “Maybe when u begin some kind of work, that will help. Having somewhere to be, something to do…In meantime, i guess, try and keep busy.”

(no reply from R)

(no reply from R)

Rebecca’s daughter, Jillian, called to tell me her mother had died Monday morning. “I am so sorry,” I told her repeatedly. That was all I could say.

Rebecca’s last words to me were, “Im not managing this lonely thang very well today. Blah!”

Did she see my text? (“Maybe when u begin some kind of work, that will help...In meantime, i guess, try and keep busy.”) I hope not. And I wonder, if I had sent different, more supportive, more loving words, earlier, would it have changed anything? Or mattered? If I had picked up the phone instead of texting, would it have saved her? I’ve thought a lot about this. And this: Would I have told a failing cancer patient to “try and keep busy?” No.

After my son died, a well-meaning friend told me to “try and keep busy.” Is this suggestion useful to a dying person? No. And yet I typed these very words to a lonely, sensitive, and melancholic soul.

Forgive me, Rebecca. I am sorry.

Some time ago, R suggested I read the book Darkness Visible: A Memoir of Madness by William Styron. From this book I learned not only about depression, or “melancholia,” which Styron suggests “would still appear to be a far more apt and evocative word for the blacker forms of the disorder,” but I learned more about my friend, her illness, and her struggle. And how, as Styron states, “depression can be as serious a medical affair as diabetes or cancer.”

There was a time when I could not have fathomed the darkness. I was inexperienced. But after the death of my son the blackness came, and I saw my friend’s despair with different eyes then. And as Rachel Naomi Remen said, “It is our wounds that enable us to be compassionate with the wounds of others.” And so we were wounded, but together, walking, supporting one another.

Rebecca, I know how deeply wounded you were. How you strived for years to climb out of the depths of your despair. Or, as Styron calls it, “despair beyond despair.” To the casual observer you were doing a good job of it. There were days when you’d find relief. Kick depression’s ass. You’d rise and function, put on make-up, color your hair, take Milo to the dog park, have a friendly conversation with a stranger.

You and I would chat on the phone and crack each other up with our wicked humor and sarcasm. But I know the relief, when it could be found, was only temporary for you. You’d tell me that your vision was colorless, gray. Your bodily pain, unbearable. And that the weight, the heavy cloud, was on top of you again. “The gray drizzle of horror induced by depression,” as Styron calls it.

You’d tell me that you were exhausted, but that you would try and muddle through the day—“I’ll feel better after a nap,” you’d say. You’d tell me how the unrelenting torment had kept you awake all night, and that you had watched movies to pass the time until morning came. And that you’d try again to muddle through…to chat, to laugh, to put on make-up, to take Milo to the dog park…to escape the grip of depression and find your way out of your misery.

It is January 28, 2014, one year since your death. I have spent this morning combing once again through the pages of Darkness Visible, searching for the right words to send you—on your way.

And because no breeze stirs this caldron, because there is no escape from this smothering confinement, it is entirely natural that the victim begins to think ceaselessly of oblivion.

Be at peace, R

Tagged as: Depression In memory Suicide

My name is Deanna. I've created Willower.org to share my experience as a bereaved parent. Here, you’ll find words on mindfulness, mourning, motherhood, and the memory of my child, as well as other thoughtful information, resources, stories, poetry, and quotes.

All original content and photographs © 2013 – 2020 Deanna Kassenoff and Willower.org. Unauthorized use and/or duplication of this material without express and written permission from this site’s author/owner is strictly prohibited. Excerpts and links may be used, provided that full and clear credit is given to Deanna and Willower.org with appropriate and specific direction to the original content.